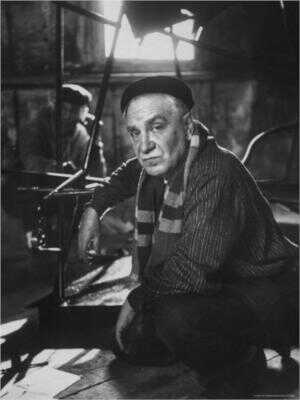 Abstract Expressionist sculptor Reuben Nakian was born in College Point, New York. Before 1911 he had briefly studied art before going to work for an advertising agency. In 1915 he attended, possibly one of the only schools at the time to have students studying modernist art, the Independent School of Art in New York City. He then went on to study at the Robert Henri School with Homer Boss and A.S. Baylinson. He also studied at the Art Students League, apprenticed to Paul Manship, from 1916-1920, where he met Gaston Lachaise and became his studio assistant.

Beginning his career as a sculptor, he associated with other Abstract Expressionists, becoming friends of Arshile Gorky and Willem DeKooning. This group of artist friends soon became the subject of a series of portrait busts in the early 1930s. He became famous in 1934 for his eight-foot-high plaster statue of Babe Ruth, which was later destroyed. He was commissioned to create busts of Franklin D. Roosevelt and members of his cabinet and in 1936 Nakian joined the WPA.

During his seventy-five year career as an artist he taught sculpture at the Newark Fine Arts and Industrial Arts College and at Pratt Institute in New York City. A prolific sculptor in stone, terracotta, plaster, steel, and bronze. In the mid-1950s Nakian began creating on a much larger scale, working more abstractly with coarse-textured bronze surfaces, which was his preferred medium. Nakian was very active until his death in 1986.

Nakian had his first major retrospective at the Los Angeles County Museum of Art, 1962, soon followed by a major exhibition curated by Frank O’Hara (who also wrote the essay for the substantial catalogue illustrating more than 100 of Nakian’s works) at the Museum of Modern Art in NY in 1966. Reuben Nakian’s work has been shown in museums and galleries around the world, with a major travelling exhibition to celebrate the centennial of his birth in 1997 and 1998 that showed at the Reading Public Museum in Reading, Pennsylvania and the Corcoran Gallery of Art in Washington D.C.

Nakian was elected a member of the National Institute of Art and Letters (1973), received honorary doctorates from the Universities of Nebraska (1969) and Bridgeport (1972), medals from the Philadelphia College of Art (1967) and the American Academy and Institute of Arts and Letters (1973), the Skowhegan Medal for Sculpture (1983), and awards from the Connecticut Commission on the Arts (1979), Brandeis University (1977) and Rhode Island School of Design (1979). He was a guest of honor at the Famous Artist’s Evening at the White House, and the Smithsonian Institution produced a documentary on his life and work titled Reuben Nakian: Apprentice to the Gods, (1985). He was awarded a Guggenheim Fellowship (1931) and a Ford Foundation Fellowship (1958) and represented the United States as the major sculptor in the VI Bienal in Sao Paulo, Brazil (1961) and the 1968 Biennale in Venice, Italy.

Nakian’s work is represented in the permanent collections and sculpture gardens of many of America’s most prestigious museums and institutions. He has been honored with major one-man exhibits at the Los Angeles County Museum (1962), the New York Museum of Modern Art (1966), the Hirshhorn Museum in Washington, DC (1981), the Milwaukee Art Museum (1985), the Gulbenkian Centro de Arte Moderna in Lisbon, Portugal (1988), and a Centennial Retrospective at the Reading Public Museum and the Corcoran Gallery of Art, Washington, DC (1999), the site of Nakian’s first one-man museum exhibition in 1935. Garden of the Gods I was one of five sculptures to inaugurate the Metropolitan Museum of Art Roof Garden, while other of his monumental works preside over civic and private settings across America. 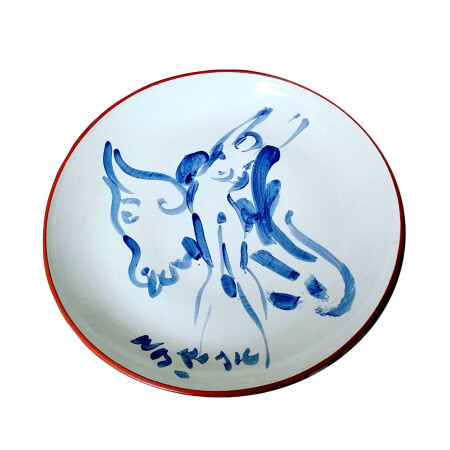