William J. Blenko was born in London, England in 1853. He worked at a glass factory in his youth. In 1893, he emigrated to Kokomo, Indiana, in the US, where he established the first American factory to produce sheet glass for stained glass windows. In 1903, he was forced to close his factory and return to England, due to an economic downturn.

His second business venture was in 1909, in Point Marion, Pennsylvania. This endeavor quickly failed, as did a third, in Clarksburg, West Virginia. At that time, Blenko found work at other established Ohio and West Virginia glass companies and purportedly received a job offer from Louis Comfort Tiffany.

In 1921, Blenko started another sheet glass company, this time setting up in Milton, West Virginia spurred on by the low natural gas prices in the area, a major concern for glass manufacturers of the time, which drew many prospective glassblowers to the area. His new company was originally named Eureka Glass Company, later changing the name to Blenko. Until the arrival of his son, William H. Blenko, in 1923, he had no employees, making and selling all of his glass himself.

Soon after the onset of the Great Depression, which decimated the stained glass market, Blenko began to produce stemware and tableware, after finding two expert glassblowers to work for the company in 1930. However, this did not mean the end of Blenko’s stained glass industry. Blenko Glass Company still produces hand-blown sheet glass for use in stained glass windows, as well as architectural glass.

Blenko’s early successes include providing glass for the stained glass windows of St. Patrick’s Cathedral in New York City, helping the company earn national recognition. Prior to 1946, Blenko’s tableware output was largely functional and classical in form but sold very well at high end department stores throughout the country. As a testament to the popularity of Blenko’s early tableware, the White House has a collection of Blenko table ware, which is used periodically.

Change came in 1947 with the decision to hire Winslow Anderson as a full-time design director. The work of the company’s first designers achieved critical acclaim, including having several of Anderson’s designs receive the Museum of Modern Art’s Good Design Awards in 1950, thereby ensconcing Blenko as a leader in modern American glass through the 1950s and 1960s. Blenko’s “Historic Period”, the focus of collector and cultural interest, begins with Anderson in 1946 and includes the work of John Nickerson up to 1974. The second designer, Wayne Husted, did much to propel the company into the forefront of cutting-edge design, notably including pioneering the concept of “architectural scale” designs. In 1964, Joel Philip Myers, Husted’s successor and founder of the Studio Glass movement, further improved the company’s importance and reputation by directly engaging Blenko with Studio Glass.

A new wave of public interest in Blenko began with the opening of the Blenko Museum in 2000, the first independent organization dedicated to research and education of the company’s historical work. Aside from curating year-long exhibitions of the company’s work, the Blenko Museum worked with the Corning Museum of Glass in 2005 to include Blenko in a small but powerful survey exhibition organized by Tina Oldknow, Curator of Modern Glass, titled “Decades in Glass: the ‘50s” featuring Wayne Husted’s designs.[3] With strong interest from collectors and nationwide exposure on PBS television specials, the company’s reputation has grown to reach new audiences. Two Blenko documentaries, Blenko: Hearts of Glass and Retro Blenko; Three Designers of American Glass, gave the company national exposure and lead to Blenko glassware being frequently featured in PBS pledge drives nationwide. Fourth-generation company President Richard Blenko often personally participated in these pledge drives, generating a sharp spike in publicity and positive effects on the company.

The Blenko Glass Company filed for Chapter 11 bankruptcy in May 2011.[4] In August, 2012 Blenko Vice President Katie Trippe announced that Blenko Glass was rebounding after filing for bankruptcy protection. Citing increased sales and lower gas prices she said the company is making a strong effort to move forward.[5] A reorganization plan was accepted by the court in December 2012, clearing the way for the company to exit bankruptcy in early 2013.[6][7] The company exited bankruptcy in 2013 and continues to produce art glass for the consumer market. Despite increased fuel costs, a short period of inactivity, and a rapidly changing industry and marketplace, the company continues to produce glass art ware. On August 3, 2015, the Eight Annual Festival of Glass held in Milton, West Virginia brought in collectors from around the US.

Blenko’s special commissions include the Country Music Awards trophy and numerous sculptures by the contemporary Studio Glass artist Hank Adams, represented in many museums throughout the US. 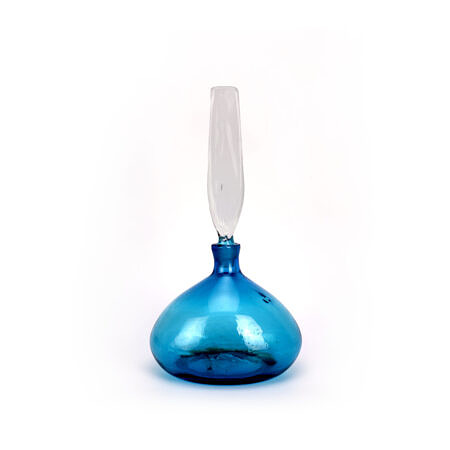